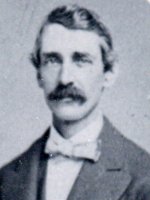 William Rich Hutton was born in Washington, DC on March 21, 1826. His parents were Salome Rich and John Hutton. He received his education in mathematics, drawing and surveying from the Benjamin Hollowell School in Alexandria, Virginia. In 1846 he went to California as a payroll clerk with the U.S. volunteer forces; he returned to Maryland in 1853. In 1855 he married Mary Augusta Clopper, daughter of Francis Cassatt Clopper of Gaithersburg; they had a son and four daughters. William Rich Hutton died on December 11, 1901, and is buried in the cemetery of St. Rose of Lima church, near his home, Woodlands, in Clopper, Maryland.

During the period 1873-1880 William Hutton apparently entered into a partnership with his brother, Major N. H. Hutton (1834-1907), a leading Baltimore architect, former partner with John Murdoch (both charter members of the Baltimore Chapter of the AIA). William Hutton was elected as a corresponding member of the Baltimore Chapter in December 1872. [Other engineers who were so-called “non-professional” members of the chapter in this period were Wendell Bollman, Charles Latrobe, J. L. Randolph, John Ellicott, John Wilkinson, and J. C. Wrenshall.]

William Rich Hutton apparently practiced as an architect for about a decade. Only one building is known that has been attributed to him: the St. Rose of Lima church in Clopper, Maryland that was built to replace the 1835 church that was destroyed by fire in 1883. [There is a drawing by Hutton of the original church, but not of the replacement building.]