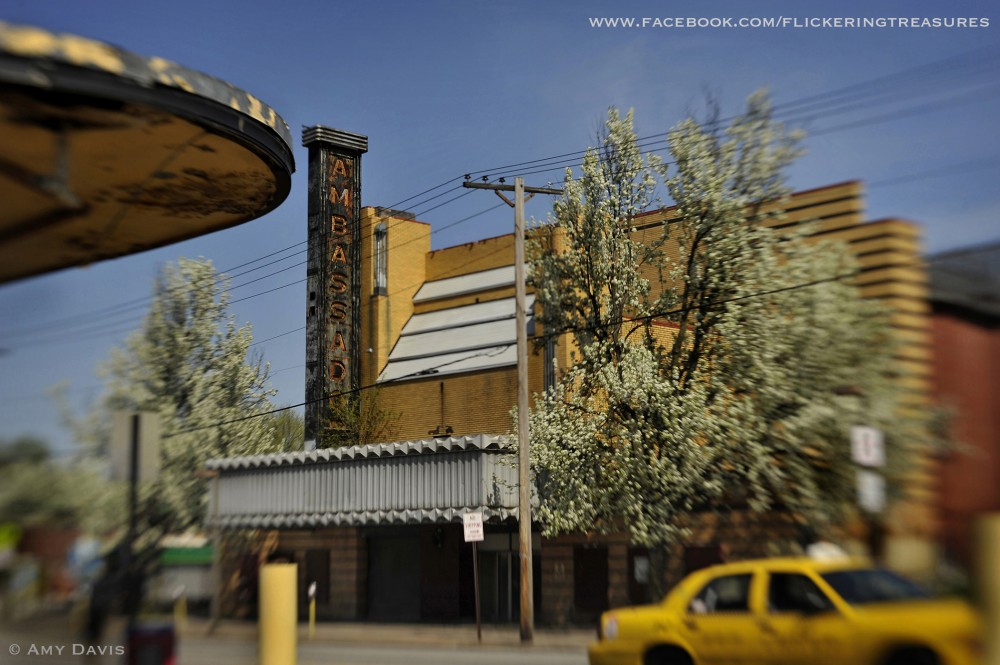 The Ambassador Theatre in 2010, Image courtesy the author

To My Valentine: The Ambassador Theatre

Baltimore has been home to more than 200 movie theaters since the first storefront nickelodeons appeared at the close of the 19th century. I am completing the manuscript for a photo book on more than eighty of Baltimore City’s old movie houses. The majority of these buildings are still standing, though most are unrecognizable as theaters. Each one has entranced me for different reasons. Selecting just one valentine is painful, but the Ambassador Theatre is in need of a lot of love now.

My first love was the 1939 Senator Theatre. Then I met her slightly older cousin, the 1935 Ambassador at 4604 Liberty Heights Avenue, and I fell even harder. Both Art Deco gems were designed by Baltimore architect John Jacob Zink for Durkee Enterprises. The Senator is a looker, with her sexy rows of jujube red and green glass blocks. The battered Ambassador is a more dangerous love interest. Its lobby was charred after a fire in 2012. Copper trim has been stolen, and some of its glazed buff bricks have tumbled away. The blade sign is intact, remarkably, but badly deteriorated. In short, the Ambassador is a girlfriend with a great past, but serious health issues.

Yet her form is still voluptuous, with streamlined curves that expressly speak to the function of the building. It was a miniature Radio City Music Hall. Sleek stripes inside echoed the horizontal banded brick on the exterior. Sightlines and acoustics were impeccable. Swirls of floral terra cotta filigree decorated the auditorium’s ceiling and the grillwork above a pair of faux balconies. At night the Ambassador’s indirect colored lighting beckoned you inside.

After the last film was shown in 1968, the auditorium was stripped as it suffered one indignity after another. It was used as a catering hall, roller rink, cosmetology school, and church. There were no takers at an auction in 2009. CHAP afforded the Ambassador some measure of protection when it was placed on the “Special List” in 2013.

This commercial stretch of Liberty Heights and Gwynn Oak Avenues in Howard Park has been neglected for years. In 2014, a much-needed ShopRite supermarket was built across the street from the Ambassador. (Ironically, a one-time competitor, the long-closed Gwynn Theatre, was torn down for this development). The Howard Park community has expressed interest in the Ambassador, but whether the historic architectural character of the building will be preserved remains a troubling question. Baltimore has a skimpy collection of great Art Deco buildings. This is one of our very best.

Photographer Amy Davis has been researching and photographing a book called “Flickering Treasures: Rediscovering Baltimore’s Forgotten Movie Theaters” for over seven years. Follow the book on Facebook to learn more:www.facebook.com/flickeringtreasures.

Want to have your love letter to a Baltimore building featured? Visit http://baltimorearchitecture.org/love-letters-to-baltimore-buildings/ for details on how to submit. We plan to continue to feature love letters long after Valentine’s Day!