CANSTRUCTION is a national event that gathers teams of architects, engineers, contractors, students, and the public to design and build structures made entirely from canned foods within a 10’x10’x10’ space. Afterwards, all the canned goods are donated to the Maryland Food Bank. 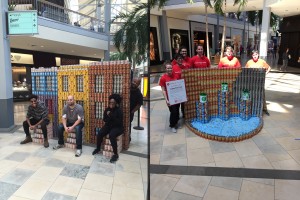 The Baltimore event, now in its seventh year, is organized by the Baltimore Chapter of the American Institute of Architects (AIABaltimore) and the Baltimore Architecture Foundation (BAF). In 2015, local architecture firms Brown Craig Turner and Hord Coplan Macht donated a combined total of 3,425 cans of food after being used to design their CANsculptures.