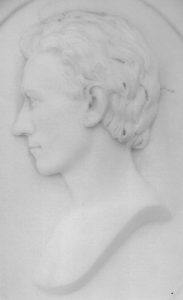 William H. Reasin was born in 1816 or 1817, in the Halls’ Cross Roads (now Aberdeen) vicinity of Harford County, Maryland. He was the son of William Dulin Reasin and Sarah Ashby Jones Reasin. He married Hannah E. Cole (1825-1905) and had four children. By 1847 this Harford County native was living in Baltimore and practicing architecture. His father is believed to have been a carpenter as well as a planter but we have no information about William H. Reasin’s architectural training. He was an early practitioner in the use of architectural cast iron for commercial buildings in the city.

When he died after an illness of about a year, 3 March 1867, he was living at his country residence on Glenville Road between Churchville and Darlington, Harford County MD visiting his Baltimore office about once a week, traveling by way of rail. He is buried in the Spesutia Church yard, St. George’s Parish, Perryman, Harford County, Maryland, with several generations of his family.

In ca.1849 Reasin advertised, with his first partner: 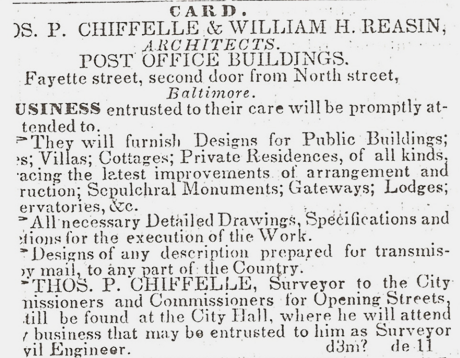 In 1849 they designed Baltimore Cemetery, the cemetery layout, the castle gatehouse, original gothic chapel (no longer standing) and the Egyptian-revival mausoleum.

In the early 1850s, Reasin was in partnership with Samuel B. Wetherald (Wetherall) and George A. Frederick noted in his Recollections that they “did quite a large amount of work here”. Reasin alone frequently is credited as the architect in references and no Wetherald (alone) references have been found. In the last few years of his practice his partner was Daniel Crummer (Krummer) who succeeded him. Crummer died 5 October 1868.

He was a member of and teacher at the Maryland Institute for the Promotion of the Mechanical Arts (now the Maryland Institute College of Art) whose building he designed in 1851, probably his largest and most important work, destroyed in the Baltimore Fire of 1904. He also was the local representative of James Bogardus and Robert G. Hatfield of New York for the construction of the Sun Iron Building in 1850, where he had his office for his entire career.

Because of its visibility today, Reasin’s best known work is probably the Independent Fire Company or No. 6 Engine House on Orleans Street, 1853. Also in 1853 he designed the former Trinity Episcopal Church still standing on Broadway and Pratt, now a store. The Samuel Shoemaker house,1853, still stands, 901 St. Paul St. In 1856 he designed Noah Walker’s Washington Building on E. Baltimore Street, frequently illustrated but no longer standing. The Washington statue from the corner of this building is now in a niche in Druid Hill Park. He also designed Noah Walker’s residence, Dumbarton, in Pikesville, still standing but extensively remodeled externally.

The Friendship Hebrew congregation’s Oheb Israel Synagogue was Reasin’s first known work, 1847, formerly on Eden Street between Baltimore and Lombard Streets. In 1860 he designed an extension of Robert Carey Long’s Lloyd Street Synagogue, adding two bays to the east, precisely reproducing its original details. He designed the James Carey country residence, The Mount, in 1864, still standing and recently restored and adapted to a new use.

To date we know over 60 documented works by William H. Reasin including commercial, institutional, religious, and residential in Baltimore City, and in Baltimore and his native Harford County.

Frank E. Davis (see his biography on this website) once styled himself as William H. Reasin’s successor.

The image above is of a bas-relief carved in marble, by family tradition the work of William Henry Rinehart. Reasin and Rinehart both were on the early faculty of the Maryland Institute. Valued at $35 in the inventory of Reasin’s personal property after his death, this “gilt frame glass marble plate & brackets” was the most valuable item in his residence.

Upon Reasin’s death in 1867, Thomas Dixon (see biography on this website) inventoried his office contents, listing each of his books by approximate title and author. This is a unique and valuable insight into a mid-19th century architect’s personal library. All were purchased by his partner Daniel Crummer who died not long after Reasin, and we do not know the books’ disposition.

The Inventory is among Reasin’s estate papers in the Register of Wills office, Harford County Court House, Bel Air, MD.

Office furniture and books were in Reasin’s Baltimore office in the Sun Iron Building while the balance of the inventory was in his retirement residence between Havre de Grace and Darlington (today’s address 1722 Glenville Road, Havre de Grace). This portion of the inventory was made by C. M Jameson and Thomas Dixon and witnessed by Daniel Crummer, Reasin’s partner who purchased this entire lot for $277.75. We do not know how Reasin acquired his library nor do we know its final disposition after Crummer’s death about a year and a half later.