Robert Carey Long, Sr. was the first native-born architect in Baltimore (indeed, in Maryland), self-trained, in an era when the only architects available in Baltimore were professionally trained men, two with national practices and not residents — Benjamin Henry Latrobe and Robert Mills — and a third — Maximillian Godefroy — was a Baltimore resident for about 14 years from 1805,  trained in France, a refugee, and he returned to Europe in 1819.

Robert Carey Long, Sr. was born about 1770, probably in Baltimore, the illegitimate son of Robert Long and possibly Ann Barry.  Upon his father’s death in 1779 young Long received two-thirds of his father’s estate and Ann Barry received one-third “ . . . in consideration of her care and attendance . . . “ during his final illness.  Young Long was also to be “brought up and educated in the Religion of the Church of England.”

Young Long was apprenticed to a carpenter, his trade when he first appeared in the Baltimore Directory of 1796, living at 8 Hanover Street.  In those days before the emergence of the architectural profession as we know it today, the “house carpenter” was often the designer or architect and what we would call the general contractor, a title he would hold in the directories until 1824 when he was identified as “architect.”  He is identified as “Archt” in the engravings of 8 of his works in the border around the Poppleton Map of Baltimore, 1823, containing a total of 37 engravings of Baltimore’s most important structures.

On October 11, 1797 young Robert married Sarah Carnaghan.  The couple had four daughters, Margaret, Jane, Ann and Sarah, and a son, the first Robert Carey Long, Jr. who died when less than 2 years old.  Long’s wife Sarah died in 1807 and their daughter Sarah died in 1809.

Long married a second time on January 24, 1809, to Anna Hamilton.  The Roman Catholic Bishop John Carroll married them in the home of Long’s friend Charles Ghequiere, a Baltimore merchant and importer. (The Ghequiere family came to Baltimore from Hamburg, Germany.)  The new couple had a son, the second Robert Carey Long, Jr., born February 5, 1810, who would grow up to be the first native professionally-trained architect in Baltimore and in Maryland.  (See his biography on this website.)  Four more daughters followed, a second Sarah, Rebecca (who died as an infant), Eleanor and Sophia. His wife Anna died in 1826 at the age of 42.  Daughter Sarah would marry Louis J. Ghequiere and their son Thomas Buckler Ghequiere (1854-1910) would become another important Baltimore architect.  (See his biography on this website.)

Robert Carey Long, Sr. died at the age of 63 on February 22, 1833 “after a few weeks’ illness” and was interred in St. Paul’s Cemetery where his tombstone remains to this day. “The vast number of edifices . . . which have been erected under his superintendence in our city, furnish the best evidence of the estimation in which he was held by his fellow citizens. (obituary, Baltimore American February 23, 1833)

His will provided for the education of all his children. To his son Robert  he bequeathed “all professional, and scientific books, drawings, manuscripts, instruments and everything of that kind, maps, charts, office furniture and everything pertaining to my professional or personal use of every description.”   His son Robert was also to receive one thousand dollars “ . . . for the purpose of enabling him to visit Europe to complete his professional Education . . . provided . . . my son should not have visited Europe previous to my decease.”

The first known work by Robert Carey Long, Sr. was in 1797, the design and construction of the Assembly Rooms at Fayette and Holliday Streets, an elegant setting for social events.  With the addition of a third story later in 1844 it became the “high school” or Baltimore City College and it was destroyed in the Holliday Street fire in 1873 which also destroyed Long’s Holliday Street Theatre (ca. 1812-1814) next door.

Only four architectural works by Long are extant today.  Arched niches for ornamental stoves were details of all three of these public buildings.  The Peale Museum and St. Paul’s Church also had central heating systems, their design a sideline business of Robert Mills. 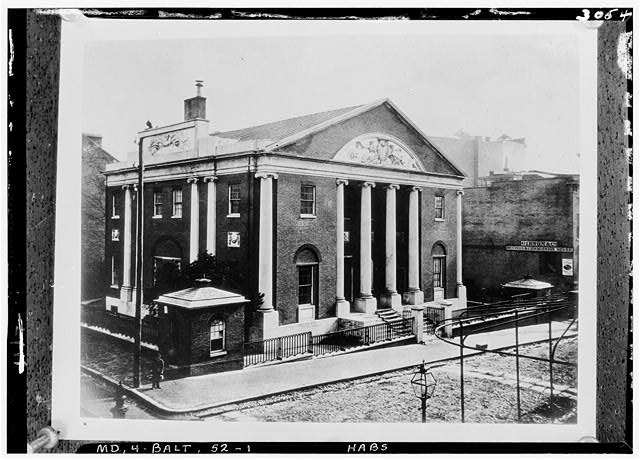 The Peale Museum for artist Charles Willson Peale, 1813, was the first structure in America designed to be a museum, still standing on Holliday Street between Lexington and Saratoga Streets.  Long was a Trustee.  It was the site of the first lighting of a building by gas.  Gas illumination of buildings and streets would follow this demonstration.  Peale, Long and three others established the Gas Light Company of Baltimore, the ancestor of today’s Baltimore Gas and Electric Company.  The tympanum lunette sculpture by Guiseppe Franzoni from Long’s demolished National Union Bank of 1807 has ornamented the garden of the Peale Museum since the early 1930s when the Municipal Museum of the City of Baltimore was established here.

At Charles and Saratoga Streets Robert Carey Long, Sr. designed a new building for St. Paul’s Episcopal Church, 1814-17, the third St. Paul’s Church on that property.  In the English late Georgian style, it was the most sophisticated and largest church in Maryland after the contemporaneous Roman Catholic Cathedral nearby, by Benjamin Henry Latrobe. The two buildings became local rivals of Rector, then Episcopal Bishop James Kemp and Roman Catholic Bishop John Carroll.  Indeed, Kemp and Long envisioned that St. Paul’s would be the Episcopal Cathedral of Maryland.  St. Paul’s suffered a disastrous fire in 1854.  New York architect Richard Upjohn designed a new church, incorporating Long’s walls, identified today by their Flemish bond brickwork and stone trim.  The two stone bas-reliefs high in the west wall, by Antonio Capellano, were salvaged from Long’s church.

By 1824 Long was living on Hamilton Street in a house and its adjacent row, generally attributed to him as architect.  The row still stands with only minor alterations.  The Hamilton Street Club occupies one of its houses.

In his later life Long was engaged in various civic affairs.  He was a Manager of the Maryland Institute for the Promotion of the Mechanic Arts in 1825, an institution we know today as the Maryland Institute and College of Art.  His son Robert Carey Long, Jr. was to design its later building but he died prematurely and it was designed by William H. Reasin, 1851.  (See his biography on this website.)

Robert Carey Long, Sr. was a Commissioner in 1825 appointed by the Mayor to study the feasibility of a sea-level canal across necks of land from Baltimore to Port Deposit, but it was never built. The Baltimore and Port Deposit Railroad (1831-1838) took this route from Baltimore to Havre de Grace.  (From 1838 this was the Philadelphia, Wilmington and Baltimore Railroad, later the Pennsylvania Railroad, today Amtrak.)  The Susquehanna and Tidewater Canal from Havre de Grace to Wrightsville, PA, completed in 1840, was the outcome of this study.

In 1830, upon the successful trip by Peter Cooper’s locomotive on the B & O Railroad to Ellicott City, Robert Carey Long, Sr. wrote an endorsement of railroading in the Baltimore American; he was a passenger on this trip.

In 1829 and 1833 the Baltimore City Directories indicate him as “architect and engineer”, his last office on Fayette Street west of St. Paul Street.  His grandson T. Buckler Ghequier wrote in American Architect and Building News (June 24, 1876) that “The latter years of his life were mostly given to civil engineering; and the laying-out of Canton, on the outskirts of Baltimore, was his last work.”

No doubt Robert Carey Long, Sr. designed and built many private residences in his career, ca. 1797-1832, which left no documentation of their origin.