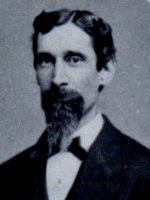 The following biographical sketch was prepared in 1992. It has been edited and formatted for the Web.

Nathaniel Henry Hutton was born in 1834, the son of Salome and John Hutton. Very little is known about him, in spite of the leading roles that he and his firms had in Baltimore architecture for a time in the 1860s and 1870s. He has been referred to with the title of Major; the source of this distinction is unknown, but it probably was from service in the Civil War. Hutton died in Baltimore on May 8, 1907.

Hutton formed a partnership with John Murdoch in about 1867. Their office in Baltimore was located on Lexington Street, east of Charles Street. During the period 1873-1880, Hutton entered into a partnership with his older brother William Rich Hutton (1826-1901), a world-renowned civil engineer. [Another brother, James D. Hutton, was a cartographer in Washington, DC.]

Hutton was a charter member of the Baltimore Chapter of the AIA when it was created in 1870 and served as the Chapter’s first Secretary. He soon became Chapter President himself, but resigned from the both the presidency and the Chapter in 1876.

Few buildings are known that have been ascribed to Hutton or to the partnership of Hutton & Hutton. Most of the known works were done in the name of Hutton & Murdoch. George Frederick commented in his 1912 Recollections that Hutton & Murdoch had been responsible for St. Peter’s Episcopal Church (1868; now Bethel AME Church) on the comer of Druid Hill Avenue and Dolphin Street. [Frederick was mistaken–St. Peter’s was on Lanvale, not Dolphin Street.]

Hutton apparently left architecture for an engineering career. By the late 1880s he had become an engineer for the Baltimore Harbor Board. He rose to Chief Engineer and finally President of the Harbor Board, a position he held at the time of his death.