Jacob Wall, Jr. has long been one of our more obscure 19th century architects but with the easy access to read and search the Baltimore Sun in recent years, his project list and significance have grown.

His best known work, with his brother Ephraim (1802-1865), might be 2 W. Madison Street, the elegant mansion of Samuel O. Hoffman, 1842, at the head of N. Washington Place that burned severely in December 2010 but has now been restored externally and rehabilitated internally for continuing commercial use. It was not known to have been his work until very recently, often being attributed to his contemporary Robert Cary Long, Jr. (1810-1849).  Jacob Wall’s most significant work might be the Charles Street Methodist Episcopal Church, 1843, that once stood on the northeast corner of Charles and Fayette Streets.  Closely related, architecturally, also by Wall, is the Evangelical Reformed (now UCC) Church, 1849, still standing in excellent condition on Church Street in Frederick, Maryland. The Court Street Methodist Episcopal Church in Lynchburg, Virginia, 1850 and long since demolished, is documented as a copy of Baltimore’s Charles Street Methodist Episcopal Church.  In 1852 the Sun also reported churches by Wall in Lancaster, PA, New Orleans and St. Louis. Wall’s work included other churches, elegant residences, and commercial buildings, mostly in Baltimore.  Many of his residences were in the Mount Vernon area including the Thomas Swann house (1846) on Franklin Street and Miss Harper’s house on Cathedral Street, 1842, opposite the Basilica, documented as Jacob Wall’s work with his brother Ephraim. 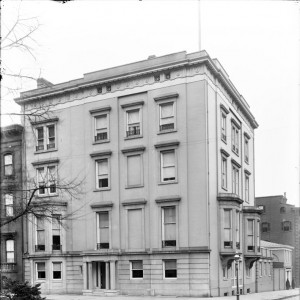 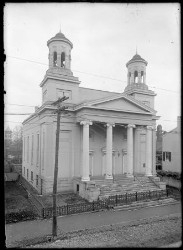 With the Sun’s profusion of accounts of new buildings in the nineteenth century, we see an interesting hierarchy in the style of attributing buildings to their designers, a hierarchy the reporters must have understood but we can only understand them with those printed accounts before us and a knowledge of those buildings’ designs.  Many designers were called builders.  Others were called “carpenters” and “house carpenters” and the word “carpenter” did not not just apply to the men who sawed lumber, made mortise-and-tenon joints, drove nails and assembled prepared wood to become a building.  Jacob Wall (and his contemporaries) were called all these things as well as “architect”. We can judge the excellent style of his buildings and can be justified and comfortable in calling him  “architect”.

By comparison, his contemporary, Robert Cary Long, Jr. (1810-1849) was always called “architect”. This hierarchy was not related to designing buildings and purchasing building materials.  One of the original rules of the American Institute of Architects (founded 1857) was that architects should not be the purchaser or supplier of building materials.  However, Long, predating the AIA but always styled as “architect”, regularly advertised for the materials for his buildings, carefully itemizing quantities.  The founders of the Baltimore Chapter AIA in 1870-71 were always styled as “architect”.

Jacob Wall, together with his wife Sarah Ann Deems (1809-1886) had eleven children, six sons and five daughters.  Their youngest son Norval Wilson Wall, born in 1848, was also an architect and he moved to Colorado in 1876.  He was a member of the A.I.A.   Jacob Wall and his wife Sarah are buried in Green Mount Cemetery together with their second son J. Edward (1832-1864) and several other children, perhaps infants.  His brother Ephraim (1802-1865), named with him for several buildings, is buried in a nearby lot together with his wife Catharine (1810-1897) and their daughter and her husband.