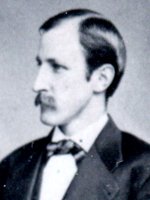 Benjamin Buck Owens became a member of the Baltimore Chapter, A.I.A. in 1873, shortly after it was founded. He was born in Baltimore September 13, 1841 and educated here. He enlisted in the 11th Maryland Volunteer Infantry in the spring of 1864, attaining the rank of First Lieutenant. For several months following the Civil War, Owens remained in the Army’s Commissary Department. He began his study of architecture in this period and later apprenticed with an as-yet unidentified practicing Baltimore architect. He established his independent practice in 1875, designing the usual range of buildings including commercial, industrial, churches, schools and residences.

Owens’ first partner in the 1890s was Alphonsos H. Bieler (1862-1951) who had apprenticed under E. F. Baldwin. Bieler was an alumus of the McDonogh Institute (now the McDonogh School) where his school record and his life are well documented in McDonogh’s archives. Bieler left Baltimore about 1900 and Owens’ next partner was Spencer E. Sisco (1874-1951) who continued the practice as Owens & Sisco as late as at least the 1930s.

Owens’ industrial buildings (for which he was noted) were not merely utilitarian. In their details he gave them a distinct architectural style: the street railway car barn on Druid Hill Avenue just south of the park (1885); Terminal Warehouse, Pleasant Street and Guilford Avenue (1893); the lithography plant of A. Hoen, Biddle and Chester Streets (1902); Scarlett’s Warehouse on Pratt Street (1913).

Some of his best churches include: Jessup’s Methodist on the York Road, Sparks, where in 1886 he gave an older plain meeting house a remodeling with a distinctive new façade; Christ Methodist, Chestertown (1887); the North Capitol Street Methodist Church in Washington (1891); Wesley Methodist, later Christian Science, Maryland Avenue in Annapolis (1895) and St. John’s Methodist, St. Paul and 27th Streets (1900).

The McDonogh School gymnasium, designed by Owens and Bieler, 1893, unfortunately was demolished just a few years ago.

His houses include one which is now the Newman Center for Towson University (1896); Scarlett’s house, 4201 Greenway (1913) for whom he also designed the Pratt Street warehouse; and the elegant Hunting House at 4309 St. Paul Street (1914).

In 1893, Owens gave a Sunday Herald* reporter his impression of the recent progress and future direction of Baltimore architecture.

There has been the greatest change in architecture in the last 20 or 25 years, and this has been especially in regard to the employment of architects. It was formerly the case that when a person desired to construct a building of any kind it was not deemed necessary to employ anyone to draw plans, make specifications, or, in fact, perform any of the duties which come under the personal supervision of an architect and are included in his category of accomplishments or duties. Then the builder or contractor took the place of the architect, and the entire work was submitted to him, with but few restrictions.

It is no wonder that builders and contractors made money at that time, though, of course, in many instances it was done in a perfectly honest manner. I know of a builder here in the city at present who has made a great deal of money, and he still continues the construction of buildings, but on an entirely different plan. Although he ostensibly prepares the plans for all the buildings which he puts up, in reality he has them prepared by an architect. He has found this necessary on account of the many details and designs in architecture which did not formerly exist. The change has been marked in the past few years, for the evolution from the crude Romanesque to the lighter and more aesthetic styles of the Italian, and French Renaissance has been almost a revolution.

I do not know that beauty at the present is sacrificed to comfort and utility, for the American, above all things, delights in external appearances. Of course, it is possible for the two to be combined so that both may be equally advantageous. Elaboration, decoration, both interior and exterior, prevails much more than of late years. A brown-stone front dwelling is frequently spoken of as being very expensive, but it is not the case that the stone itself is really so valuable, it is the carving that is put upon it.

One peculiar characteristic that I have noticed about architects is that they can shine forth, make a bigger flare-up and die out quicker than any other class of professional men. I have seen a great many instances of this. Architecture, above any other profession, calls for work which in the liberal meaning of the word must be a credit to the designer, for if there is an error of judgment, a mistake in calculation, it becomes more evident each day.

I regard the World’s Fair buildings as wonderful examples of the architectural profession. That they will form models for the builders’ art many years to come is a foregone conclusion.

I think that the tendency here in Baltimore is toward the classic style, and this will predominate for some time to come. As examples of the Italian Renaissance, may be cited Mr. Robert Garrett’s residence and the new one which is being erected for Mr. William Keyser.

*June 11, 1893 “Talks with Architects”, a lengthy article including interviews with 8 architects.

by James T. Wollon, Jr., A.I.A. with research by Peter Kurtze, Pam Scott and this author.