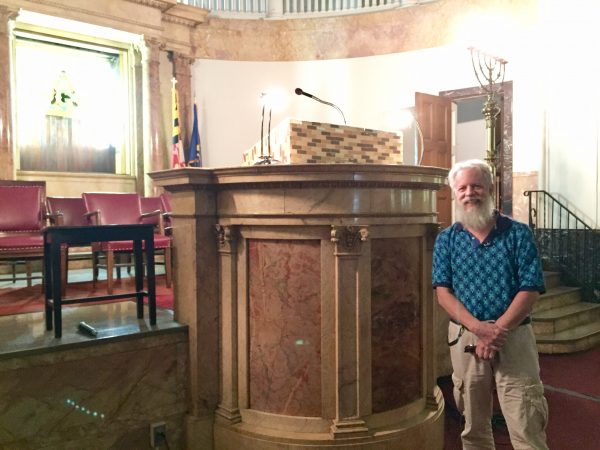 “It’s great the buildings are just open to you; that’s wonderful,” says DOB 2018 attendee J. Michael Flanigan, who visited the Most Worshipful Prince Hall, among other gems. “It’s a great synagogue, just one of Baltimore’s incredible buildings, and it’s a masonic lodge.”

Flanigan is a Baltimore native who has been attending Doors Open Baltimore for four years. Last year when Prince Hall first participated as a DOB site, he stopped by to thank the Masons for opening their doors and for being great stewards of the building. “It’s important to care for these buildings because they are such a record of who we are and they are such incredible spaces. I’m deeply grateful for all the people who are taking care of these Baltimore buildings and that they allowed the public in because that raises the profile, awareness, and respect for what’s happening.”

He mentioned that it’s important to learn about Baltimore through its architecture because “everything else is gone—all those people are gone—leaving us with what they built and what they wrote which are incredible achievements. This synagogue speaks to the survival and thriving of the Jewish community centuries later and it’s a magnificent space.”

Good point! Thank you for sharing your DOB story. We hope to see you again next year for Doors Open Baltimore 2019! #ExploreMoreDoors

← 2018 Year in Review
The Baltimore Architecture Foundation Opens Its Doors →