East of the Fallsway in the Johnston Square neighborhood is one of Doors Open Baltimore’s newest sites, Charm City Meadworks (CCMW). Co-owners James Boicourt and Andrew Geffken launched their business in July of 2014, immediately becoming Baltimore first and only meadery.

“We make mead, which is a honey-based alcoholic drink—it’s actually the world’s oldest alcoholic beverage,” says Boicourt. “It’s been around since before written history. A lot of people associate it with the renaissance, but that was the late part of its history.”

Although mead has been around for ages, Charm City Meadworks’ origin story begins with the Intro to Beekeeping course Boicourt took back in college. After cultivating his beekeeping and home brewing hobby for almost a decade, James and Andrew decided to take a leap into entrepreneurship. “When we did this 3.5 years ago, it was time. We had been looking at some different opportunities in the alcoholic beverage industry and we took a harder look at mead.”

A misconception Charm City Meadworks attempts to dispel is the belief that mead is a sweet drink best saved for certain occasions. “We saw a really good opportunity with beer drinkers and people who regularly enjoy an alcoholic beverage and want it to be something refreshing,” Boicourt says. “We focus on stuff that’s lighter and dryer than a lot of the meads that have been out there in the past. We’re shooting to bring people an everyday beverage.” 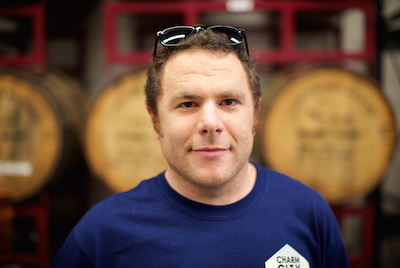 Charm City Meadworks sets itself  apart from the competition by fearlessly experimenting with the limits of the mead taste spectrum. With 13 mead varieties currently part of their standard and seasonal products, it’s hard to deny this alcoholic beverage’s versatility, which most likely contributes to the businesses exponential growth and success. Since 2014, this meadery has significantly increased mead production and distribution reach inevitably forcing them to seek more space for their operations.

Earlier this year, the Charm City Meadworks team vacated their small warehouse in Curtis Bay for a 6,500 square foot postal garage built in the early 1920’s. When it came to the final decision to call this industrial space home, Boicourt says, “The proximity, the cool building, the price, and the resolve all lined up.”

When asked his thoughts on the most interesting story the building has to share, Boicourt will tell Doors Open Baltimore participants that it’s all in the foundation. “It was built over land reclaimed from an oxbow, which is a [U-shaped] loop in the old path of the Jones Falls stream. When the city buried the stream into the giant concrete tunnels of the Jones Falls Conduit, they filled the land in with rubble and earth left over from the Baltimore Fire and decided to put a building on top of it,” Boicourt says.

During Doors Open Baltimore 2017, Charm City Meadworks is thrilled to seize the opportunity to inform visitors about the building’s history while hosting mead tastings in their new taproom. At the same time, another goal they have is to help increase traffic to Johnston Square. “Drawing people into this neighborhood would be a really big goal for us, in general, and I see this as a chance to do that. It’s a neighborhood that’s in really strong transition,” Boicourt states. “It’s got a lot of great bones and bringing more people over to this side would help bring a lot of positive momentum.”

On October 28, Doors Open Baltimore participants will have the opportunity broaden their taste palates with mead. Charm City Meadworks will definitely have something to appeal to the beer enthusiast, wine lover, and cider fan.