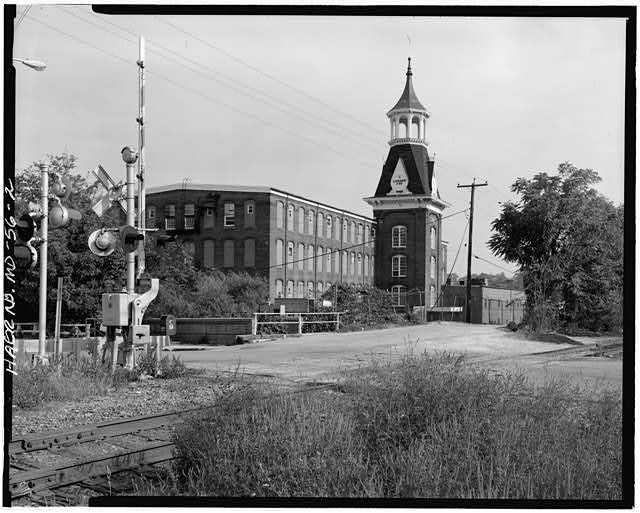 In the 1912 volume of Men of Mark in Maryland, Reuben Gladfelter is described as a “leading contractor and builder of the Woodberry District of Baltimore.” Although not an architect in title, Gladfelter does appear to have used the architectural training he received as a young man to design and construct some of Baltimore’s iconic textile mills. Gladfelter came of age just as architecture was becoming a formalized profession in the United States. The American Institute of Architects formed in 1857 and its Baltimore Chapter in 1870. Also, architectural drawing was now being offered at the Maryland Institute School of Design with the idea that drawing would improve taste and judgment in architectural design.

Gladfelter was born in Baltimore County, where he grew up and spent much of his life. He traced his roots back to Casper Gladfelter who immigrated to the United States from Switzerland in 1747. The Gladfelter clan had a strong interest in ancestory. A book was written about the family history by one of its kin and, in 1906, the Baltimore Sun reported that 1,200 Gladfelters from across the country converged upon York, Pennsylvania for a family reunion, near the location where the late Casper settled.

Gladfelters’ father was a mechanic and worked in a paper manufacturing plant. As a boy, 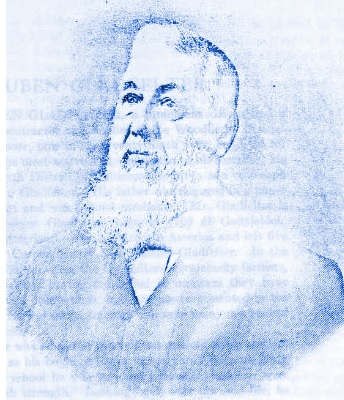 Portrait from Men of Mark in Maryland, 1912

Gladfelter was given odd jobs while he was not at school to instill in him a strong work ethic. He recalled that his mother would kneel by his bedside and pray that he would grow up to be a good and useful man. Gladfelter took his mother’s prayers to heart and later in life, after several attempts to attain public office, declared that his “only ambition is to further the interest of the public.”

Gladfelter studied geometry and architectural drawing at the Maryland Institute. He also took private drawing lessons from a Mr. Erhart, noted as a prominent architect and teacher of the time. After his studies he landed a job as superintendent of construction at William E. Hooper and Son, a major textile manufacturer in Woodberry. Gladfelter designed the sprawling Clipper Mill (today Whitehall Mill) after the original building burned in 1854. The mill grew with the prosperity of the company and Gladfelter designed additions along an extensive line of factory buildings hugging the Jones Falls. The new mill burned in 1865 and was quickly rebuilt. Gladfelter maintained continuity along the impressive complex by employing uniform architectural elements—notably large, paired arched windows. The building also featured a wooden Italianate cupola for ventilation.

Gladfelter would find the opportunity to truly put his architectural training to use with Meadow Mill, a showpiece that broke from the strictly functional approach of industrial architecture. Meadow Mill was built in 1877 during an economic recession. Despite the downturn, Woodberry’s mills were booming and Hooper clearly wanted to show this through the construction of his new mill that would face the Northern Central Railway. The four-story mill was built to house all the necessary machinery for manufacturing seine twine. Gladfelter likely called for the Italianate lintels over the windows and the impressive central tower topped with a steepled belfry. Workers living in the newly built Brick Hill village across the railroad tracks would have heard its bells ring out. The front of the mill, facing the railroad, also featured a landscaped flower garden and walking paths, lending a pastoral feel to this site of heavy industry

Gladfelter is also presumed to have designed the more elaborate Gothic Revival and Italianate homes in Woodberry built as part of Hooper’s mill village. The deep-set Gothic Revival duplex at 3608-3614 Clipper Road is divided by a cross gable. The South facade, which faces what is now called Shiloh United Apostolic Church, is more elaborate than the North side, featuring quoins and an elaborate roof and porch, indicating that the South building may have been built earlier, possibly at the time the church was built. At the end of Clipper Road (3711-3713) is an Italianate duplex that looks to have been designed by someone with architectural training, likely Gladfelter. The house was built for supervisors at the mill. It features a cross gable, tripartite window in the center bay, a front porch, and scroll-sawn cornice brackets.

Gladfelter was a more prolific builder than designer. In 1889, he began his own construction venture with Levi Chambers and together they formed Gladfelter & Chambers, Contractors and Builders. They erected about two-hundred homes in Roland Park, including the home of William G. Nolting of prominent architecture firm Wyatt & Nolting.

Much is know about Gladfelter’s personal life thanks to Men of Mark of Maryland and the extensive book documenting the Gladfelter family history. In 1853, Gladfelter married Elizabeth Jane Roles, with whom he had eleven children, a sizable addition to the already considerable extended Gladfelter family. He lived in Woodberry while working for Hooper and lived in the manor house on Rockrose Avenue that predates the mill company construction, today a nursing home. His hobbies included agriculture and horticulture, which he believed were beneficial from a physical and moral standpoint. The house was well known around the neighborhood for its many varieties of blooming flowers.

Gladfelter was a staunch Methodist and zealot of the Temperance Movement. Woodberry went dry in 1866 through a county ordinance and remained dry after annexation to the City through what was known as the “local option.” Gladfelter was a fierce supporter of the local option. However, Gladfelter’s connection to the Temperance Movement proved to be a hinderance when he tried to enter politics in Maryland—the state that produced H.L. Mencken would later gain the reputation as the wettest state in the Union during Prohibition.

In 1886, Gladfelter was living at 2072 Druid Park Drive in Woodberry in a Second Empire brick duplex. The other half of the duplex was owned by his business partner, Levi Chambers. Gladfelter died in 1922, at ninety years old having had a long and successful career in the building industry.