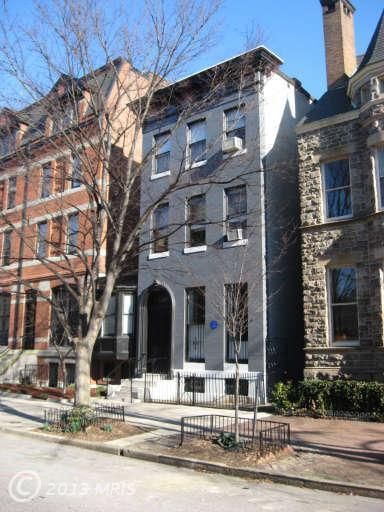 I love Baltimore more than I thought— it is so rich with memories — it is nice to look up the street and see the statue of my great uncle and to know that Poe is buried here and that many ancestors have walked in the old town by the bay. I belong here, where everything is civilized and gay and rotted and polite. And I wouldn’t mind a bit if in a few years Zelda and I could snuggle up together under a stone in some old graveyard here. That is really a happy thought and not melancholy at all.

–F. Scott Fitzgerald, From a letter written in 1936 to his secretary

Places are keepers of memories. It is why I love old buildings and why I love Baltimore. I get such a sense of the city’s history walking through its extraordinary neighborhoods and, having lived here for most of my adult life, I have grown deeply attached to the city as a keeper of my own memories. The intermingling of place and memory colors my daily experiences and makes Baltimore home.

I feel a sentimental connection to 1307 Park Avenue, not owing to my own memories, but to a connection to F. Scott Fitzgerald’s life in Baltimore. The Fitzgeralds only lived on Park Avenue for two years but I discovered it was an important, turbulent period in their lives. Scott finished Tender is the Night at 1307 Park Avenue. Zelda was well enough that she could visit from Sheppard Pratt on the weekends and take painting classes at MICA. Scottie was growing up, nearly ready to make her debut in Baltimore society. At the same time they were broke. Tender is the Night tanked. Scott became increasingly distressed and alcoholic and unable to write. Zelda was in and out of expensive clinics, her mental health deteriorating. Scottie had to act as a go-between for their landlord. It was the last place they all lived together.

When I stand outside 1307 Park Avenue I imagine the little happy moments. I imagine Scott trying to get work done during the week so he could make the most of his time with Zelda on the weekend. I imagine Zelda painting, the Menckens coming over for dinner. I imagine through all the turmoil the moments of great love and tenderness between Scott and Zelda. I imagine Scottie being happy when both her parents were sober and happy.

I don’t often make trips to 1307 Park Avenue—people live there. The last time I went was about a month ago when I was rereading The Great Gatsby. A light was on inside so I didn’t stay long. I lingered for a few minutes before walking over to the Francis Scott Key monument at Eutaw Place. I sat by the monument and read, peeking up periodically to watch people come and go and I thought about how Scott Fitzgerald would walk by the monument after going out drinking with Mencken to look at the statue of his great uncle. The glorification of his great uncle would fill him with pride and shame.

I don’t know what I would do if I owned 1307 Park Avenue. Maybe I would create a little museum in the basement like the Duchess of Windsor Museum on Biddle Street. Maybe living there would inspire me to finish writing that novel I’ve left stuffed in a drawer for two years. Or maybe I would just throw a lot of parties so I can show off that I live in the Fitzgerald house. I would definitely do something about the grey painted brick.

Would it be too much to install a little green light?