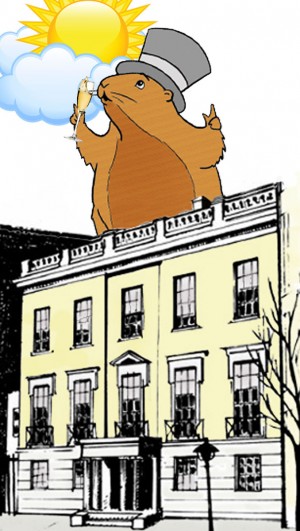 Punxsutawney Phil, Shubenacadie Sam, Wiarton Willy and groundhogs all over North America will emerge on February 2 to indicate how much Winter is ahead…A perfect reason to throw a party!

Join the Baltimore Architecture Foundation at the Mount Vernon Club for hors d’oeuvres and cocktails. Of course, the most delectable treat is the Club itself, which is rarely open to non-members. Experience the refinement and charm of this historic and venerable ladies club, once the gathering place of choice for the Duchess of Windsor and the who’s who of Baltimore’s elite.

The event will feature on a talk on the architectural history of the Mount Vernon Club by BAF Past President Charlie Duff.

Funds raised during the event will support BAF and its many programs, from fostering the next generation of architects, to promoting the value of Baltimore’s architectural legacy to the public.

Dress Code:
Business/Festive Attire. Please note that the Club does not permit denim.

Located on historic Mount Vernon Place, The Mount Vernon Club is housed in an elegant Greek revival building. The house was built for Mr. William Tiffany in 1842 on land he acquired from heirs of John Eager Howard. The house remained unchanged until the turn of the century when the elaborately carved overdoors, mantels, and mirrors on the second floor were added.

Numerous owners occupied the house until The Mount Vernon Club (originally located at Three West Mount Vernon Place) and The Town Club of the Washington Apartments merged in 1941 and purchased the property, then the home of Mr. Blanchard Randall.

Since the opening of the Club, members have generously loaned or given objects of art or furnishings to be used in the clubhouse and the Carriage House. Among the gifts donated were two classically woven 18th Century French tapestries, one signed “M.R. Aubusson”. Since these were given, they have held their prominent position on a wall in the Drawing Room.

Under the stewardship of The Mount Vernon Club innovations, renovations and restorations have continued in the buildings. Over the years, changes were made to meet the needs of those who resided at Eight West. The historic beginnings are visible. The improvements and modifications have made it attractive and comfortable for its members and their guests to meet and entertain in a gracious environment.

If you can’t make it to the party this year we would still appreciate your support of the Foundation. Please consider a contribution to BAF.