Alexander Garvin, author of “Public Parks: The Key to Livable Communities,” explains the rationales for the existence of public parks, the forms they take, their value, ways to pay for and govern them, and the ingredients that make successful parks, providing the first single definitive source of wisdom about them.

Alexander Garvin, strategist of the public realm, is currently president and CEO of AGA Public Realm Strategists, a planning and design firm in New York City. He is adjunct professor of urban planning and management at Yale University, where he has taught a wide range of courses for forty-two years, including Introduction to the Study of the City, which has remained one of the most popular courses in Yale College. 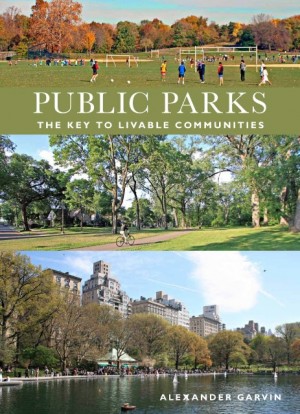 Special Thanks to the Morgan School of Architecture and Planning for their support.

The Robert E. Lewis Memorial Lecture is sponsored by the Baltimore Architecture Foundation through a gift from the family of architect Robert E. Lewis.

Robert E. Lewis (1904-1996) was a founder and principal for the architectural firm of Wrenn, Lewis, and Jencks.Active in Baltimore from 1927 until 1978. Wrenn, Lewis and Jencks designed many significant buildings in Baltimore and throughout Maryland.Beginning as residential architects in Roland Park, Guilford, and Homewood, their successful design for the Faculty Club (now the Hopkins Club) at JHU led them to expand their practice to include commercial buildings as well.

Their long standing relationship with Johns Hopkins, both the University and the Hospital gave them a steady stream of commissions, often updating buildings to reflect the Hopkins’ changing needs.

Their work also included several jobs for the Baltimore Museum of Art as well as the Maryland State House Office Building in Annapolis. They did not work in a particular style, rather their buildings tended to reference their neighborhoods always with a nod toward Classical detailing.Most of the firms records are now housed at the State Archives in Annapolis. Mr. Lewis’s personal library and many of the firms renderings were given to the Baltimore Architecture Foundation by the Lewis family. The BAF would like to thank the Lewis family for their support and generosity in endowing the Robert E. Lewis Memorial Lecture.