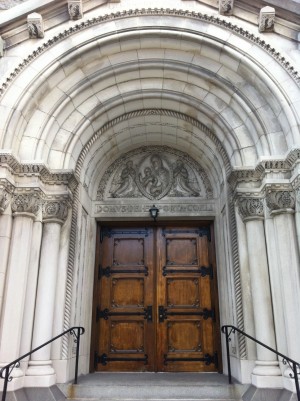 Please join us on April 21st as we take a closer look at two churches by Baltimore architect E. Francis Baldwin. Designed more than forty years apart and spanning two separate partnerships, the churches represent very different styles and periods. The first church, St. Ann’s was designed in 1872 while Baldwin was in partnership with Bruce Price. Then in 1914 while in partnership with Josias Pennington, Baldwin built St. Wenceslaus for a growing Bohemian congregation. Both churches feature exceptional examples of  Mayer Studio stained glass. BAF Board Member and Historian Jim Wollon will join us to discuss the architectural histories of both churches. We will also be treated to a choral performance by the Baltimore Czech Choir. 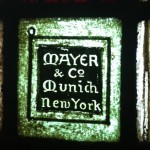 Our first stop will be St. Wenceslaus in East Baltimore.  Founded in 1872 in a neighborhood of East Baltimore then known as Little Bohemia. The parish was created primarily to serve the Bohemian (Czech) community in Baltimore. Church services were originally held in both the English and Czech languages. The present church was built in 1914 by E. Francis Baldwin, and at that time the church had 7,000 Bohemian Catholic members. By 1920 the church was the fourth largest in the Roman Catholic Archdiocese of Baltimore. In recent years, the ethnic character of St. Wenceslaus parish has undergone a gradual change from a majority Czech parish to one that is multicultural and multiracial, first as many Poles and Lithuanians moved into the neighborhood, and then as the neighborhood shifted to having an African American majority.

Next we’ll head over to St. Ann’s on Greenmount Avenue. Built in1874, by Baldwin for Captain William Kennedy and his wife Mary Ann Jenkins. The Anchor out front is a reminder of Captain Kennedy’s vow to build the church after surviving a raging storm. Recent interior work, including new paint colors, were selected by the late Michael V. Murphy, FAIA.

Saint Ann Roman Catholic Church on Greenmount and 22nd Street was erected through the generosity of Captain William Kennedy, commander of one of the most famous Baltimore clipper ships, The Wanderer. Caught in a raging storm off the coast of Vera Cruz in 1833, Captain Kennedy vowed that if he and his crew returned safely to port, he would build a church as a testament of his gratitude to God. The anchor held. Upon returning to Baltimore, Captain Kennedy gave up his life at sea and gave up his brig. He did, however keep his anchor and chain. True to his promise in 1872, Captain Kennedy and his wife, Mary Ann Jenkins, secured property and funds for the church which was to be named for Saint Ann, the patron saint of sailors. The cornerstone was laid in 1873, the same year Captain Kennedy and Mrs. Kennedy died. Although neither of them lived to see the church completed, they are both buried under the main aisle of Saint Ann Church.

The Church was completed in 1874 and was later expanded to increase the seating capacity. Later a school and convent were also added. In 1925 the original anchor was restored and placed in a stone cradle beside the cornerstone where it remains today. The historic, cultural and architectural significance of this church is well documented in the church archives, and the Church of Saint Ann continues to be a neighborhood landmark. (History taken from St. Ann’s website. More here.)

Special thanks to Father Peter Lyons of St. Ann and St. Wenceslaus for inviting us into these exceptional spaces.

Parking::
There is a large fenced in parking lot on the east side of the church. The parish will provide limited shuttle service over to St. Ann’s for the second part of our tour and will return tour goers to the parking lot at St. Wenceslaus afterwards. If you prefer to drive to St. Ann’s parking is limited to the surrounding streets. Map & Directions to St. Ann’s.

Please RSVP to Tracey at baf@baltimorearchitecture.org