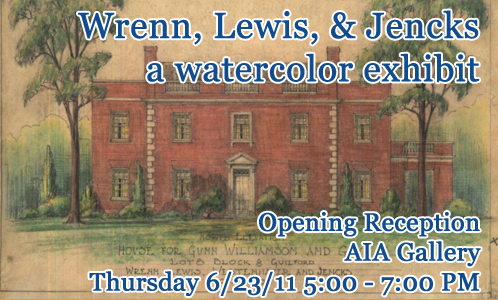 Exhibit features watercolors, sketches and blueprints of the firm Wrenn, Lewis and Jencks from the archives the Baltimore Architecture Foundation (BAF). Active from 1927 until 1978, Wrenn, Lewis and Jencks Architects designed many significant buildings in Baltimore and throughout Maryland. They began as residential architects in Roland Park, Guilford and Homewood, but their successful design for the Faculty Club (now the Hopkins Club) at Johns Hopkins University led them to expand their practice to include commercial buildings as well. Their work included several jobs for the Baltimore Museum of Art as well as the Maryland State House Office Building in Annapolis.

They did not work in a particular style, rather their buildings tended to reference their neighborhoods always with a nod toward Classical detailing. The firm began as Lewis & Westenhaver Architects in the early 1920’s but soon became Wrenn, Lewis, Westenhaver and Jencks until Herbert J. Westenhaver left the firm in 1929.