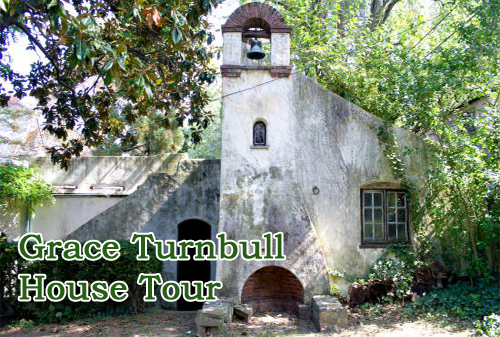 Grace Turnbull, the renowned 20th century artist and Baltimore native commissioned her brother, Bayard Turnbull to design a house and studio for her in Baltimore’s Guilford neighborhood.  The house, built in 1927, was designed in the Mediterranean Revival style and features an elegant studio where Turnbull created the sculptural work that she had turned to at that point in her career. At the time of its completion, the site was in rural Waverly, before the development of Guilford by the Roland Park Co.  Turnbull adorned the property with her work, including four massive sculptures, hewn from tree trunks, that are located on the corners of the house. 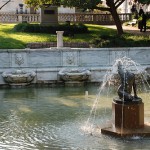 Turnbull continued to sculpt well into her late 80s and finally put down the chisel at age 90.  She created a number of works still on display to the public of Baltimore.  She is the sculptor of Naiad, which is located in the fountain at the center of the East Park of Mt. Vernon Place.  Turnbull also created the sculpture memorializing the Baltimore poet Lizette Woodward Reese, which is located on the grounds of the former Eastern High School at 33rd Street.  To read more about Turnbull and her work, please read Maryland Art Source’s biographical profile.  Tom Chalkley wrote another fun piece about Grace Turnbull and her work for the City Paper in 2000, which you can read here.

The Baltimore Architecture Foundation is pleased to announce that the current owners have graciously agreed to allow us to tour the house on Sunday, April 25th with a limited number of Foundation members.  Don’t miss this unique opportunity to see a terrific work of architecture created by the brother and sister team of Bayard and Grace Turnbull.

$15, Members only – Limited spaces for the tour… act fast!