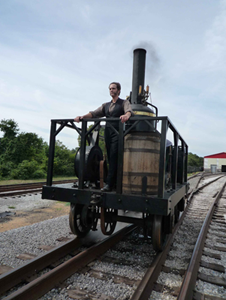 Mechanic to Millionaire: The Peter Cooper Story, a film produced by The Gardner Documentary Group, will cover the life and times of this 19th century pioneering inventor and philanthropist who still speaks to us. Peter Cooper built The Canton Iron Works in Baltimore and cobbled together the first American steam locomotive, the Tom Thumb. From railroad rails he developed the wrought iron I-beam for multi-storied construction, which allowed cities to grow vertically.   He was instrumental in financing and laying the first transatlantic cable with Cyrus Field.

With less than a year of formal schooling, he founded The Cooper Union for The Advancement of Science and Art in 1859, realizing his dream of free education for thousands of Americans.  The Great Hall, a public auditorium on the lower level, continues to provide a platform for major social movements and politicians advocating reform.  It was here that Abraham Lincoln made his celebrated “Right Makes Might” speech that arguably won him his party’s nomination for president.
Before being nominated by his party for President, Barack Obama also spoke eloquently about our troubled economy, and later won the top place on the Democratic ticket.

Through his life of invention and philanthropy, we learn about Baltimore’s role in the industrial revolution and Cooper’s vision of social justice. During this recession, his warnings and business advice resonate and bring him back in a fresh and startling way.

James Dilts, historian and noted author of The Great Road: The Building of The Baltimore and Ohio Railroad will join producer/director Janet Gardner for the Q&A discussion following the screening. 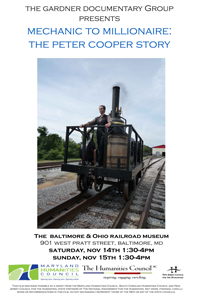