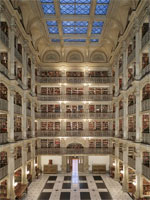 Charles Belfoure, author of Edmund G. Lind; Anglo-American Architect of Baltimore and the South will discuss his research and Lind’s place in the history of American architecture.  This book is the latest publication of the Baltimore Architecture Foundation.

Lind is one of the prominent 19th century Baltimore Architects whose canon of work has been studied and categorized by the Dead Architect Society, a project of the Baltimore Architecture Foundation.  Lind has a distinguished career in Baltimore from 1855 until 1882, when he relocated to Atlanta, Georgia, where he practiced for a decade before returning to Baltimore in 1893.

The lecture format is a presentation followed by audience Q&A.  The audience is invited to bring a brown bag lunch.

Jim Dilts, railroad and architectural historian and former Sun reporter and columnist on how the B&O Office Building reopens as a Kimpton Hotel and the railroad’s Locust Point grain elevator becomes Silo Point.

Bankruptcy in Maryland: Myths and Facts

Architecture Books in the Collection of the Library at Evergreen