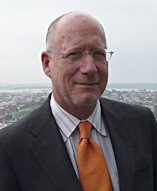 Baltimore attorney Jim Astrachan speaks about intellectual property rights, libel, and the perils of advertising claims at the Architecture Foundation’s free noontime Forum. His presentation will include examples of false claims in advertising and touch on who owns an architect’s plans.

The lecture format is a presentation followed by audience Q&A.  The audience is invited to bring a brown bag lunch.

Edmund G. Lind; Anglo-American Architect of Baltimore and the South

Jim Dilts, railroad and architectural historian and former Sun reporter and columnist on how the B&O Office Building reopens as a Kimpton Hotel and the railroad’s Locust Point grain elevator becomes Silo Point.

Bankruptcy in Maryland: Myths and Facts

Architecture Books in the Collection of the Library at Evergreen