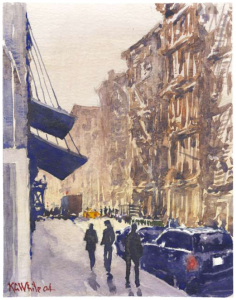 The Baltimore Architecture Foundation is hosting two exhibits at AIABaltimore during July and August. In the upstairs gallery and bookstore will be an exhibit titled “Architectural Quick Hand” highlighting the sketchbooks and paintings of a loosely form group of architects and artists that have been meeting regularly to capture the city and its environs. Exhibitors include: Craig Purcell, Ed Love, Stryker Sessions, Stewart White, and Jillian Storms, among others.

In the main gallery downstairs is the exhibit “Joie de Vivre: Capturing the Spirit of People & Place – The Paintings & Pastimes of New York Architect Kevin Campbell White.” Kevin White was a prolific artist and documented the urban landscape around him, filing sketchbooks with depictions of quirky subway riders to colorfully painted travel scenes. He practiced architecture mostly in New York from his office in Brooklyn and died nearly a year ago at the young age of 56. This exhibit is an attempt to honor his legacy.

These shows can be viewed July 1-August 21, 2008 during AIABaltimore’s regular business hours (9am – 4:30pm Monday to Thursday). In addition to the July 13th reception there will be extended viewing hours for First Thursdays, July 3 & August 7, from 5-7pm.